The tunnellers building Queensland’s biggest infrastructure project reckon they can bore two 7m-wide, 5.9km-long tunnels deep under the Brisbane River, Kangaroo Point Cliffs and the CBD and come out within the width of a hand of their target at Victoria Park.

The incredible engineering feat will kick off by the end of the year, when two 100m-long tunnel-boring machines are lowered into the ground at the Gabba.

They will navigate their way underground, plotting a course 45m deep below Brisbane River and skirting below basements, sewers and cables under the CBD.

They expect to travel between 5m and 10m a day, grinding through the same rock that makes up the Kangaroo Point Cliffs on the southside, before transitioning into the Neranleigh-Fernvale beds, such as the grey stone seen in Roma Street Parklands, on the northside.

The Courier-Mail, in conjunction with the Cross River Rail Delivery Authority (CRRDA), is presenting a series looking at the project and what it will bring to the state.

Construction is pouring $2.8 million a day into the Queensland ­economy – jumping to $4 million a day as it ramps up even further through the second half of the year – and currently employs 1800 people across eight sites.

The 10.2km railway line will run from Dutton Park to Bowen Hills and include 5.9km of twin tunnels under the river and Brisbane CBD and four new, underground stations at Boggo Road, Woolloongabba, ­Albert Street and Roma Street, as well as upgrades at other stations.

It is projected to take 47,000 people off roads and offer a turn-up-and-go train timetable that shortens waiting times.

The twin borers are currently been refurbished at Pinkenba after helping build the Sydney Metro.

The 7m boring head carries a ­series of smaller tungsten discs that grind away the rock as they rotate, with the debris carried out behind it. 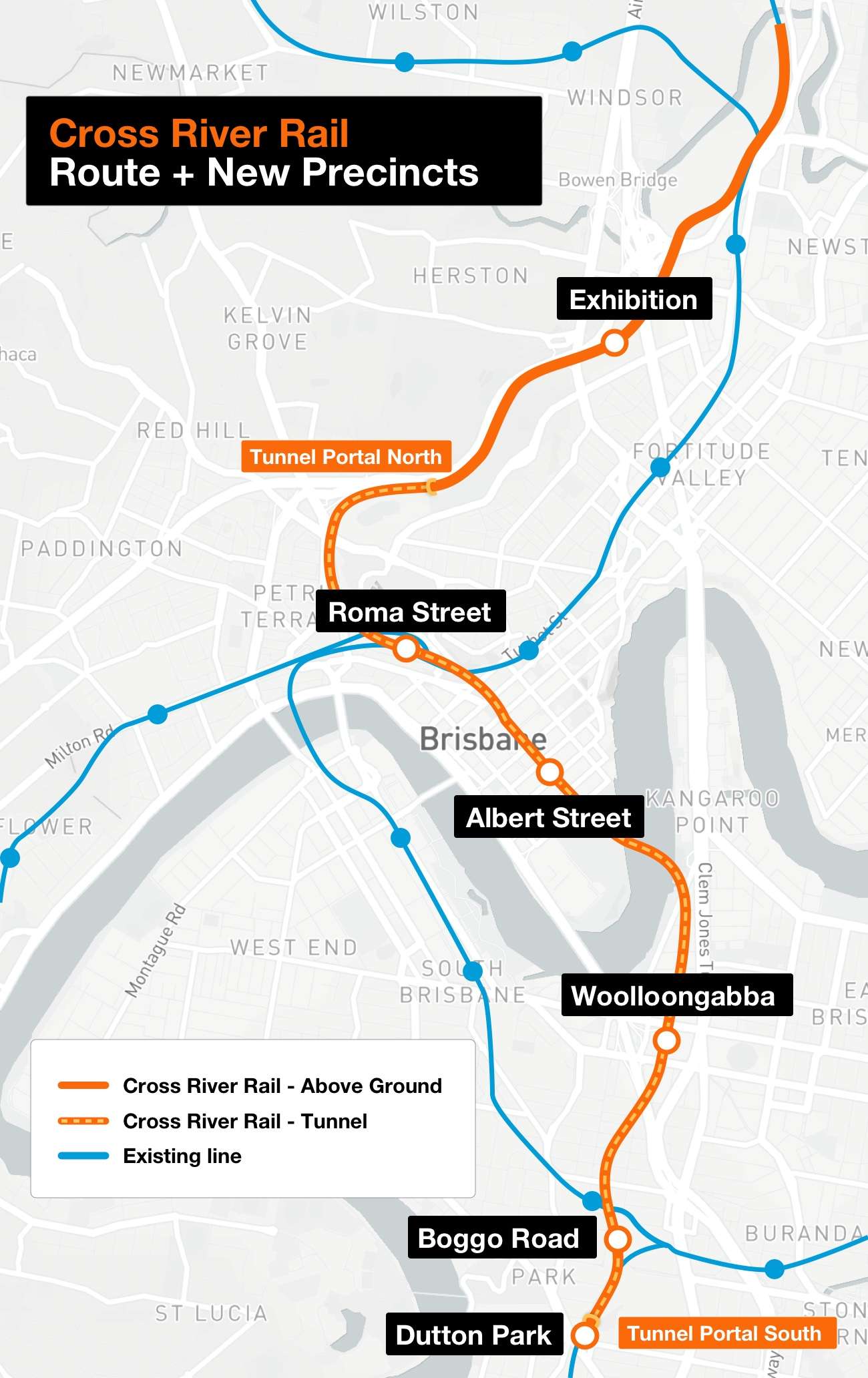 While the tunnelling is a huge undertaking, CRRDA project manager for tunnels and stations Jeremy Kruger said it will be the massive 200m-long, 17m-high caverns housing the underground stations and platforms that will be the most ­impressive for travellers.

The caverns are being mined out under the feet of Brisbane city workers, with underground teams removing the soil and spraying concrete on the walls to build the space for the platforms. Mining work is under way at Roma St, while work continues to drop the main shaft down to platform levelling at Albert St, ready for mining work to begin.

Exclusive aerial photos released to The Courier-Mail show the extent of the massive project that has been described as a heart-bypass operation that will unclog the rail network across the southeast.

● Train tunnel will be 5.9km long from Boggo Rd to beyond Roma St.

● At its deepest point, the tunnel will be 45m below the surface of the Brisbane River.

● 18 active worksites around Brisbane will be established by the end of 2020.

● There will be four new underground stations at Boggo Rd, Woolloongabba, Albert St and Roma St.